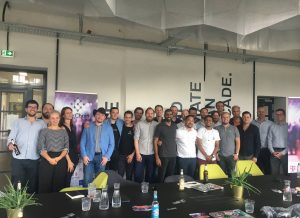 Berlin, July 3, 2019 – BerChain, an association for connecting and promoting the blockchain scene in Berlin, has announced 17 new members. The association therefore now counts 28 supporters. Among the new members are both large companies and startups, amongst them Deutsche Telekom, innogy Innovation Hub, Aeternity and Factory Berlin. BerChain brings together companies, investors, scientists and politicians on a single platform where they jointly investigate potential fields of application for blockchain technology in business and politics in order to accelerate the development of the technology. The association regularly organizes workshops, seminars and networking events for its members.

“The Blockchain landscape in Berlin is diverse but also very fragmented. More than 100 companies in Berlin are exploring the technology and its potential,” says Silvan Jongerius, president and founder of BerChain. “This makes the technological progress as well as the connection to politics, investors and academia more difficult. BerChain’s mission is to bring together the many isolated players and thus create new synergies – within and outside the blockchain ecosystem. This is how we want to continue positioning Berlin as a leading blockchain hub in the long run.”

“innogy Innovation Hub joined BerChain because we believe in the power of ecosystem building and networking – especially in such a fragmented market as blockchain. As early stage venture capital arm of innogy we have access to new startups and can introduce our existing blockchain portfolio companies to the market. That’s a win-win situation!”, says Kerstin Eichmann, Managing Director of innogy Innovation Hub Berlin.

John Calian, SVP and Head of T-Labs at Deutsche Telekom says: “The potential of blockchain technology is enormous, but we still have a lot of work to do. That’s why cooperation is so important. Together with the BerChain community we at Deutsche Telekom are looking for meaningful approaches to integrate the technology into our products and services and to promote the use of blockchain. This is the way, in which we can also strengthen society’s trust in the technology in the long-term.”

Today, BerChain is hosting a panel discussion with thought leaders of the Berlin blockchain scene at Factory Berlin. The topic of the evening “Libra, Facebook’s token: Good, bad or ugly?” is drawing over 150 attendees and will be live streamed through youtube.